The exhibit started on October 10th and will run until the end of the month.

– NANCY DONIER is a fine artist and illustrator who lives and works in Brooklyn, New York. In addition to painting, she works on paper collage, printmaking, and digital art. Her work has been shown in galleries in and out of New York City. She has created illustrations for many publications, corporations and community groups, including over 25 years of works for the New York Times. Nancy has illustrated books for adult and children. Most recently the ALA Notebook Lemonade and other Poems Squeezed from a Single Word.

– CLAUDE MARTINOT is French born and studied in Paris. She is a designer and illustrator who works in watercolor, gouache, pen and ink, and pastel. Her work has appeared in New York Magazine, in exhibits at the Bronx Zoo, the New York Botanical Garden, in newsletters and educational material for the MS Society. She has illustrated many projects for the educational market. Claude illustrated several children’s books, one of them “The Frogs and their Monster”, published by the Syda Foundation. She regularly draws and paints at the Spring Street Studio in So-Ho. 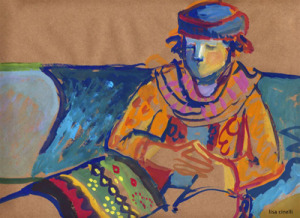 – LISA CINELLI is a painter, children’s book author and illustrator and a teaching artist. She holds a MA in Illustration from Syracuse University and BFA from the School of the Art Institute of Chicago. Lisa taught Children’s Book Illustration and other courses at the School of the Art Institute of Chicago from 1994 to 2014, then she moved to New York to work as an artist and illustrator. Her clients include Holiday House Books for Young People, Bebop Books, Cricket Magazine Group, Enesco, Harcourt Brace Publishers, “Highlights High Five Magazine”, Baxter Travenol and Augsburg Fortress. Her work is in many private collections. Recently she enjoyed a month-long residency at Ragdale in Lake Forest, Il and was a part of the faculty for three summer classes at Ox-Bow in Sanqatuck, MI. Lisa was a recipient of the Don Freeman Memorial and a runner up in 2014 illustration contest.

– LORENZO PELOSI has been learning sculpture for the last 12 years. He began sculpting after retiring as a Project Engineer for Raytheon Engineers and Constructors. There he was involved with designing and constructing Electric Generating Stations. Sculpting has fulfilled his childhood dream. The beauty and complexity of the human form have always intrigued and esthetically impressed him. His work deals exclusively with the human form, using classical sculptural methods. He studied under John Carbone at the Visual Arts Center in Summit, NJ, and currently studies under Ivan Bratko at the Ryker Hill Art Park in Livingston, NJ. Lorenzo is a graduate of Rahway HS, Rutgers University in New Brunswick, NJ and is a Registered Professional Engineer in New Jersey. He and his wife Joan reside in Summit, NJ.