CLIFTON, NJ – On Sunday, October 25, 2015 the Clifton Board of Recreation conducted the annual Halloween Parade and HarvestFest at Main Memorial Park. Over 114 participants marched down Main Avenue in the parade along with several City Officials, the Sheriff’s Department, the Clifton Police and Fire Department, the CHS Mustang Marching Band, local business mascots and more. At the park each group paraded past the judges and winners in the following categories were selected: 0-3 years, 4-5 years, 6-8 years, 9-12 years, teens & adults, pets and families and floats. Prizes were awarded to the top winners and a trophy to the best costume in each category. Recreation volunteers and Board of Recreation Members helped to make the event successful. Many donations were made by businesses in the community as prizes for the costume contest. Below is a list of this year’s winners. Congratulations to all! (In photo: Best in Group from Ages 6-8 category winner Ben Smith- dressed as a rock star) 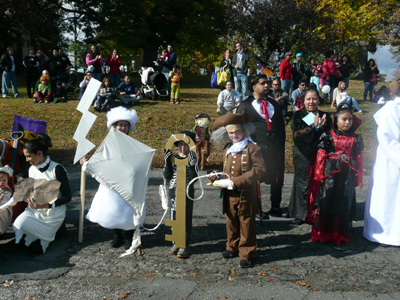 (In photo: Best in Group from Ages 9-12 category winner Mariah Fay- dressed as Up in Clifton)

The winners of the “Best in Group” from each categories is bestowed the privilege of being the 2016 Royal Court of the HarvestFest and they will get to ride in the Hayride during the Halloween Parade next year. Congratulations to all our winners and participants!