Clifton Night
At The Jackals

NEW JERSEY – On July 19, 2018, over 320 Clifton residents enjoyed “Clifton Night at the Jackals”, held at Yogi Berra Stadium, located on the campus of Montclair State University.  This annual event was co-hosted by the Clifton Recreation Department, the Clifton Lions Club and the New Jersey Jackals.

This year’s theme at the event was “Fun Fiesta”. All participants were eligible to enter a mustache contest. Any Clifton participant wearing a mustache “real or fake” received a special goody from the Clifton Recreation Department. Special prizes were given out to youth and adults who had the best mustaches.  This year’s winners were Linda White, Robin Gibson and Paul Agrusti for the adults and Melanie Garth, Melissa Garth and Andrew Dabison for the kids. Prizes we’re donated by Chevy’s of Clifton, Moe’s of Clifton, Cups of Clifton and Philly Pretzel Factory of Clifton.

Special activities included crafts, fiesta themed games and tattoos and a build a taco scavenger hunt. The first 75 participants who registered for the game through the Recreation Department were treated to a special Meet and Greet with some of the NJ Jackals players before the game started.  Clifton participants were also selected for the evening’s baseball buddies and to participate in special promotional games run by the NJ Jackals.

The Clifton Girls Softball Little League Team was honored on the field before the game began for winning the state championships on the senior level. NJ Jackals apparel and gifts were raffled off courtesy of the Passaic/Clifton Lions Club.

The event was a huge success thanks to the hard working staff, the NJ Jackals and the Clifton Lions Club.   We hope to see you next year for our Caribbean Theme! 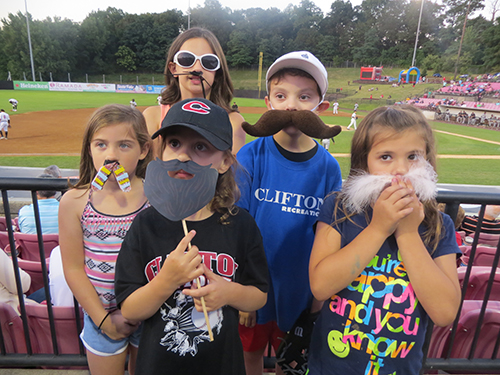