The New York Jets have taken up a cause often forgotten and more often neglected by educators and school officials across America for reasons that this author cannot explain. And because of this undertaking, the Jets’ organization should be complimented and followed by all NFL teams, and probably all sports leagues. PHOTO: Charlene Brown on left with Harrison and Principal Mary Spiga.

The Anti-Bullying Programs that the NY/NJ Jets have been involved with across the tri-state area over the past several years have put in place at many schools an awareness that standing up to bullying is the best way to combat bullying. It also shows children that are bullied that they have a place to turn to for help and friendship.

A few weeks ago the Jets Caravan Campaign of being an “UpStander not a ByStander” rolled into the Carteret Middle School (New Jersey) where 300 Sixth Graders’ have championed the anti-bullying  cause throughout the school year. Sixth Grade teacher Charlene Brown should be applauded. And I would be remiss if I didn’t compliment the Jets for making this program a core value of its many off the field activities as Charlene was quick to give credit to an article she read that espoused the Jets involvement in “Not A Bystander but be an Upstander.”  Charlene contacted the Jets and noted her school’s programs to combat bullying and the Jets in return sent Jonathon Harrison to participate in an afternoon assembly.

Harrison, #78, will be entering his 5th year in the NFL and second with the Jets in the upcoming 2018 Season.  The 6’3″ and over 300 pound offensive line man and center began his career with the Colts.  He attended South Lake High School in Florida and played for the University of Florida. 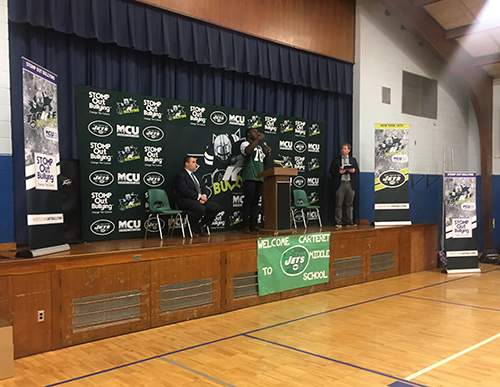 Jonathon was well received by the sixth graders in attendance as he spoke about his days in Middle School and being a member of the band and not the football team even though he was bigger than other kids.  He played the French Horn and Guitar and was passionate about being in the band.  “I was bullied in elementary school.  And by 5th Grade, I was already 200 pounds and attacked for being so big which affects your self esteem. I was an only child and had good support at home,” noted Harrison.  Harrison even talked about how he was not wanted on the soccer team because of his size.  You could hear in his talk with the students that Harrison has a true understanding about this sensitive topic. The Carteret Middle School and their Principal Mary Spiga should be lauded for placing a lot of emphasis on combating bullying and giving Jonathon a chance to speak to the students. PHOTO: On stage is Jets Center Jonathon Harrison addressing the 6th Grade Assembly with Jeff Linder, the Jets Director of Community Relations.

The number of children bullied is in the millions yet schools still need to accept this problem as being unresolved and not a right-of-passage for our youth.  The Texas shooter who recently killed ten and was taken alive was bullied according to his father.  His dress and social media postings were also signs that went undetected. His profile seems  normal as he did participate in sports before dropping out, yet, if the claims of bullying are true, then maybe some signs were ignored.  There is no easy answer but the problem exists and administrators are still not willing to devout the necessary time to combat bullying in school.

I once again commend the Jets and their terrific athletes for taking up this tough cause which is very complicated. Many of these athletes were bullied yet they went on to star at the collegiate level and play in the NFL. 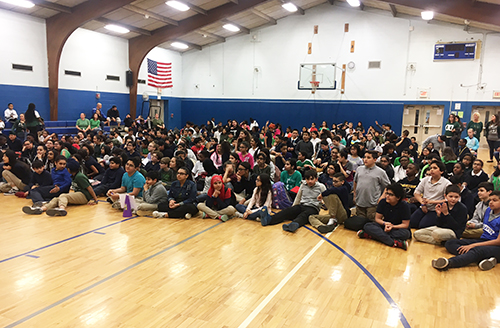