Call Your Congress Before Its Too Late!

Speaker of the House Paul Ryan intends to suspend the usual congressional procedures and allow voting on the Senate Bill S.447! Voting can take place on Tuesday (April 24, 2018). This will probably happen under “suspension of the rules”, and the debate may be limited to 40 minutes and congressmen will not be able to offer any amendments. In order for the bill to be approved, a 2/3 majority of all votes will be required.

Please promptly deliver by telephone the message below to your Member of the United States House of Representatives.

As a member of the  POLISH AMERICAN CONGRESS and constituent of Congressman/ Congresswoman ____________, I request that on April 24 he/she should vote against S. 447, because it is unfair to Poland, an important and dependable NATO ally, which was a victim of Nazi Germany, and not a villain.  Moreover, I request a roll call vote on this bill that calls on Poland to pay extravagant compensation for crimes against private property on conquered Polish territory perpetrated by Nazi Germany and the communists during the World War II era. Compensation for these crimes against private property should be paid by Berlin, and Moscow, not by Warsaw. Furthermore, Poland sent a low level delegation to the Prague Conference and never considered herself bound by the Terezin Declaration.

Please inform Congressman/Congresswoman _______________ that voting in favor of S.447 would reward the brutal legacy of Hitler and Stalin, an inescapable point of overt information concerning the period 1939 – 1989 on which all informed Americans should agree without exception.

Don’t reward and honor the legacy of Hitler and Stalin by voting in favor of S.447!

Please telephone your Member of the House of Representatives with this message on Saturday April 21 at their District offices and on Monday and Tuesday April 23-24 at their Washington office.

If you are pro-Poland, please call, fax or e-mail your Representative today and tomorrow.

Please vote NO on “H.R. 1226” or, as just scheduled – “S447”
This is a part of anti-Poland campaign since the last election in Poland.
Poland was, is and supposed to be our best ally in Europe.
Also, are you ready to change a law of our country and let the “Heirless Property” to be given to anybody but state?

Thank you for your consideration.

OPEN LETTER TO THE HONORABLE MEMBERS
OF THE U.S. HOUSE OF REPRESENTATIVES

The U. S. Congress is Being Hoodwinked on “Holocaust Restitution”

The U.S. House of Representatives has chosen to suspend its normally-applicable procedure and allow a scheduled vote to take place, not on its own Act H.R. 1226, but on Senate Act S. 447. It is about to intervene in the internal affairs of another sovereign nation and to try to pressure her to pay monies, to undeserving pressure groups, under false pretenses.

Polish Americans support just compensation for Holocaust survivors, but in present form H.R. 1226 and S. 447 would require the government of Republic of Poland to return, or compensate for, property to organizations and/or individuals, who do not have a valid legal claim to the property of Holocaust survivors. A mechanism already exists in Poland and other EU countries to adjudicate claims in a court of law by those individuals and organizations that have legal standing for each particular claim.  This is the most effective and just means to address compensation issues, not the misguided interference of the U. S. Congress!

The financial burden on the Republic of Poland and other Eastern and Central European allies in returning the so called “heirless property” to individuals or organization, who have not established a direct legal claim to such property, would be financially disastrous. If this provision is enacted, the estimates for total compensation range from 65 to 300 billion dollars from Poland itself. Note that Poland’s current annual gross domestic product is $526 billion. This would create an enormous financial burden upon Polish economy, arising from unclear legal claims. Does the U. S. Congress want to place itself in a position where it causes the financial ruin of another nation?

We would like to note that Poland was one of the chief victims of World War II, losing over 6 million of its pre-war citizens (including 3 million ethnic Poles), and ended the war with a completely ruined economy. Polish citizens, ethnic Poles and ethnic Jews, experienced physical destruction like no one else in Europe. Poland suffered proportionally the greatest human and material losses of any country during WWII. To force Poland to pay for German crimes, and for the consequences of German crimes, would be a complete travesty of justice.

Poland for decades has been the most pro-American country in Europe. It has been staunch and loyal ally dutifully complying with NATO obligations. At the time when U.S. relations with Russia are tenuous and deteriorating the United States should not do anything to potentially alienate Poland and other countries in Eastern and Central Europe.

We must also note with a great sadness that the House vote on S. 447 has been preceded by an unprecedented smear campaign against Poland in the mainstream media, a campaign that falsely portrayed our country as a Holocaust perpetrator. The House is about to vote in such a poisoned atmosphere on an issue of tremendous importance for global peace. Distorted news coverage that misleads the public can be detrimental to sound policymaking.Voting on S. 447 in such circumstances is highly unfair. It violates international legal and moral standards and undermines the very rules of democracy.

Therefore, it would be in the interest of the United States government to maintain strong relations with Poland and other Eastern and Central European allies and thus reject this fraudulent and destructive legislation.

We call on the House of Representatives to vote against S. 447 on coming Tuesday. 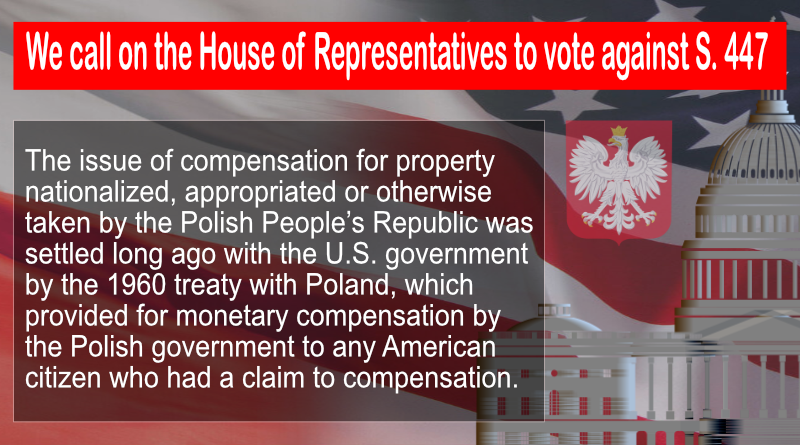