As a car enthusiast and collector in my own right, owning a 1952 Ford Customline and 1984 Caddy Eldorado, the drive to Mohegan Sun in Connecticut to witness the fourth running of the  Barrett Jackson Northeast Auction was well worth it. The three day show – June 26-29, 2019 – at Mohegan Sun drew a huge crowd of bidders and fans.

Barrett Jackson, the premier live television car auction company, has developed a rock concert like following. Established in 1971 in Scottsdale, Arizona, the original auction site was a west coast antique and classic car dream location for both the seller and the buyer. A second auction was developed for the east coast in Palm Beach, Florida which helped grow the car hobbyist’s  ability to buy and sell cars that are practical, beautiful, drivable, and affordable. The Northeast Auction was added four years ago to expand in the most densely populated region of America. Las Vegas, Nevada will be the fourth auction running in October. 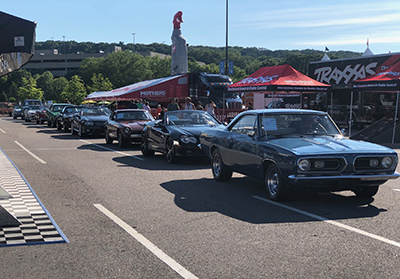 The Barrett Jackson experience at Mohegan Sun is a huge car show which allows all car hobbyists a chance to look over the cars that will be auctioned in a no reserve auction. There were over 400 classic and antique cars on display.

PHOTO: The Classic and Antique Cars line up as they head for the famed Barrett Jackson Auction Block.  Both the sellers and the buyers are excited to be part of America’s most watched television Automobile Auction.

You can go to the show and buy a ticket just to be a spectator and look over the cars on site.  You can watch the auction live and get a barometer of the prices. And, if you feel it’s in your budget, there is an auction office where you can sign up for a fee and get a bidder’s badge.

If you own a car that you think might be a classic or you own an antique or inherited an automobile from a deceased parent, you can contact Barrett Jackson to get the guidelines to have your automobile roll across the auction line.

The Mohegan Sun Casino, a world renowned casino and hotel, is a fantastic setting for Barrett Jackson. There’s plenty to do if you can book a room. As a day trip, the auction and Casino is still a great outing for those living in NYC, Long Island, North and Central NJ, Providence,  Rhode Island and Boston.

IN PHOTO: Post Eagle Reporter Jim Dombrowski with car enthusiasts brother Bob and Jersey City Body Shop owner Keith looking over high end cars that can garnish over $100,000 at the Saturday section of the 3 Day Auction. The three day auction has over 400 cars and are gaveled at prices ranging from $4000 to over $200,000. 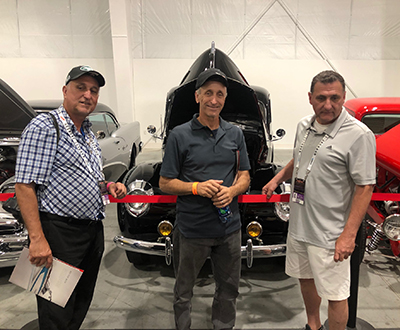