BALTIMORE, Md. (April 29, 2015) – Governor Declares State of Emergency. Rioting, violence, vandalism, looting and arson erupted here on Monday, April 27, 2015 right after the funeral services for Freddie Gray, a 25-year-old African American. Gray died in the hospital a week after being injured in police custody. A full investigation of the exact circumstances, and of the 6 police officers involved, is still underway. It will then be forwarded to the attorney general’s office for any appropriate legal action.

The photos depict Soldiers of the Maryland National Guard deployed around the National Katyn Memorial in Baltimore, MD

Previous “mostly-peaceful” protests and rallies by the black community began in earnest last Saturday. But on said Monday all hell broke loose. It intensified when Mayor Stephanie Rawlings Blake ordered the police to stand-down and only offer passive/defensive resistance. The established police lines were bombarded with large stones, chunks of concrete, bottles, etc. – with injuries being incurred. These chaotic circumstances occurred mainly in the black areas of west and east Baltimore. 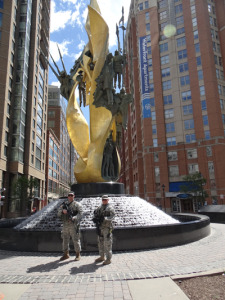 Late Monday afternoon Governor Larry Hogan declared a “State of Emergency” (not to be confused with draconian martial law) in Baltimore City. By early Tuesday morning the 2,000 Maryland National Guard troops and 500 State Troopers he activated were arriving in Baltimore and taking up strategic positions. A daily city-wide curfew was imposed from 10 PM to 5 AM until further notice.

The key business and popular tourists’ areas of Downtown, Harbor Place and Harbor East were flooded with armed and combat ready soldiers, state troopers, anti-riot formations, and SWAT teams. The National Katyn Memorial and Fountain – the center piece and focal point of Harbor East – was surrounded 360* in an obvious show of force, as also similarly happened in the aforementioned adjacent city areas.

One can only ponder what the Polish Army Officers are thinking as they gaze down upon on the strange scene below their dedicated Katyn Memorial ….  American army soldiers are patrolling and protecting them from certain Baltimore City anarchists. Comrades-in-Arms as it were. 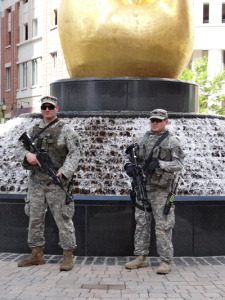