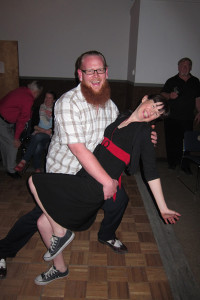 We caught the Bajuk Trio at the Sonoma Moose on Sunday Feb. 24. We hadn’t seen Joe Bajuk or Anthony Krische in a couple of months. Joe has been recovering from shoulder surgery, which was damaged through years of button accordion and pounding nails. After the repair job, the shoulder felt better, but pain radiated down the arm after he played the accordion – so, he’s laid off for a while and dramatically reduced his playing. Joe admitted that he picked up the instrument in the morning and hoped that his fingers would remember what they were supposed to do. As it turns out, they did. He played as well as ever. And it helps that he had Anthony on drums and Stefan Kochishan on sax, clarinet, & vocals.

Luckily, the Sonoma Moose continued the Sunday evening polka dance that was a staple of Little Switzerland before its demise. Little Switzerland has been purchased by a new owner, who has yet to decide what he’ll do with the property. The Moose follows the same format as Little Switzerland and the Bajuk Trio, Showcase, the Steve Balich Band, and Edelweiss are regular performers with the Gruber Family Band playing on occasion. Louie Perez who performs with Showcase dropped in for the dance and sang a couple of numbers to the delight of the crowd.