Another Side of the Court

Greg smiled after one of his big return games. The player had sprained his wrist in early December and was off for four weeks before returning recharged in late January.

According to his statistics, the 26 year old hails from Peterborough (Ontario – Canada), at six foot eight. However, Surmacz is Polish by birth and had immigrated to Canada with his parents when he had only been two and a half years old. Before trying out for the Windsor Express on his high school coach’s recommendation, he played basketball for teams in Peterborough, Ontario and in the professional European basketball league.

Although the Windsor Express (est. in 2012) is definitely not a one-man show, the team as a whole has been become a close-knit group, especially in these last few games according to Surmacz.

“I love these guys; our team motto when we bring it in is – one, two, three, family – so you feel like a family.”

Surmacz’s interest in the sport was sparked at a young age, although he started out in soccer due to his European upbringing; what truly led him to basketball was mere curiosity.

“I suddenly started getting taller and people told me, ‘You should play basketball or volleyball,’” says Surmacz. “So I tried basketball. The first time I started playing, I loved it … I just fell in love with it and I’ve been playing it ever since.”

And seeing that he has followed what he loves, it is no doubt that “adding him to the team was a very good decision on the Express’ part”, said CEO Dartis Willis.

“Greg is an outstanding player, an outstanding forward,” said chairman and assistant coach Gerry Brumpton. “And you can tell he’s had experience playing, considering his career in Poland.”

Brumpton named him as ‘one of the stars of the team’. This notion is reinforced by the fact that his face is on the Windsor Express billboard located near Ouellette Place.

“It sounds really cool,” Surmacz said, still somewhat surprised over this ‘celebrity status.’ “I want to go over there and get a picture beside it, that’d be pretty neat, you know kind of pointing up to it. It’s the first time I’ve been up on something like that.”

On top of rising onto the Windsor public’s radar, the former Lancer (his university basketball team), Surmacz is also a student who is in the middle of completing his bachelor’s degree in Sports Management and Marketing at the University of Windsor. 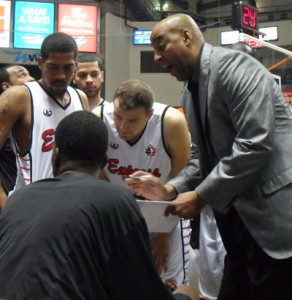 When asked what he intends to do career-wise, Surmacz is more than certain that he wants to stay in the game. “I’d like to stay in basketball, maybe get into coaching, or go towards a managerial aspect, being a player agent, representing players, try and find a job and then I just want to stay with the game as long as I can.”

The Windsor Express is here to stay and hopefully, so is Surmacz, even though he is intending on future visits to the motherland, where he previously played for AZS Koszalin.

“I enjoy Poland a lot, my grandparents are there, as well as a lot of extended family,” said Surmacz, ”and now especially with my girlfriend Kasia being there, I visit quite often.”

The young athlete is very aware of the busy life that he leads, and through proper time management, has been able to carry out and accomplish his goals.

What does he do in his leisure time? Listen to music, look into art, and yes, just like any boy or young man, play video games.

“I reward myself:  after I get my schoolwork done and go to practice, I give myself an hour to hang out with the guys, kind of just wind down for a bit.”

Through his modesty and his talent, this three dimensional athlete has definitely made a name for himself overseas and in Windsor… still doing, one basket at a time.