On Friday, January 3, 2014 at the Embassy of the Republic of Poland in Washington, D.C., the Polish American Historical Association announced the winners of its annual awards. PAHA presented the Oskar Halecki Prize that recognizes an important book or monograph on the Polish experience in the United States to Beth Holmgren, professor and chair, Department of Slavic and Eurasian Studies, Duke University for her book Starring Madame Modjeska: On Tour in Poland and America published by Indiana University Press in 2012. The book examines the career of Helena Modjeska (1840-1909), the famous actress who immigrated to California in 1872.

In photo above: Maja Trochimczyk, PAHA Online Communications Director (left) in conversation with Professor Beth Holmgren, Professor and Chair, Slavic and Eurasian Studies, Duke University, at the Embassy of the Republic of Poland.

The Mieczyslaw Haiman Award offered annually to an American scholar for sustained contribution to the study of Polish Americans was presented to Dominic A. Pacyga, professor, Department of Humanities, History and Social Sciences, Columbia College, Chicago, for his publications on Polish Americans, especially immigrant and working class Polish Americans and their descendants in Chicago. 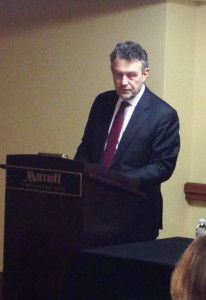 The Creative Arts Award recognizes contributions in the field of creative arts by individuals or groups who have promoted an awareness of the Polish experience in the Americas. The Award was given to Julian Stanczak, a Polish-born painter and printmaker, for his 70-year career in the arts and education and his gift for painting and insight into visual perception. Stanczak, a graduate of Yale University and professor, Cleveland Institute of Art, was one of the important pioneers in Op-Art; and the term itself was coined in response to his 1964 exhibition in New York. The year 2013-2014 has been announced “The Year of Stanczak Celebrations” by a number of Cleveland and mid-Western art institutions.

In photo on right: Ambassador Ryszard Schnepf (standing), a historian of Latin America by profession, welcomed the scholars of the Polish American Historical Association to Washington, D.C. on January 3, 2014 for its annual conference. In his remarks, the Ambassador emphasized the importance of the PAHA mission to promote research about Polish-American history and culture. He encouraged the celebration of two important anniversaries in 2014: the centenary birthday of Jan Karski (1914-2000), the resistance emissary who brought the first accounts of the Holocaust to the world, and the 70th anniversary of the Warsaw Uprising.  The annual Swastek Prize for the best article appearing in Polish American Studies was presented to Anna Mazurkiewicz, University of Gdańsk.

The Amicus Poloniae Award that recognizes significant contributions enhancing knowledge of Polish and Polish-American heritage by individuals not belonging to the Polish-American community was given to Peter Hetherington, a geologist by profession and author of Unvanquished, a 752-page biography of Józef Piłsudski.

The Skalny Civic Achievement Awards honor individuals or groups that advance PAHA’s goals of promoting research and awareness of the Polish-American experience and/or that have made significant contributions to the Polish or Polish-American community and culture. The list of 2014 Skalny Award recipients includes Post Eagle writer and contributor Edward J. Dybicz, U.S. Army veteran of the European Theatre of Operation during World War II for his support of Polish and Polish-American activities in Pennsylvania and Delaware. Mr. Dybicz is a member of Sacred Heart Parish, Swedesburg, Pa.; Susanne Lotarski, formerly a Deputy Assistant Secretary and Director of office of Eastern Europe, Russia and Independent State, U.S. Department of Commerce, for her activism in the Polish community in Washington, D.C.

Other Skalny awardees included Tony Muszynski, the founder and first Program Director of Poland in the Rockies, who served as President, and earlier as a Vice-President of the Polish Canadian Association of Calgary; Irene Tomaszewski, founding President of the Canadian Foundation for Polish Studies, Curriculum Director for the Poland in the Rockies, and editor of I Am First a Human Being: The Prison letters of Krystyna Wituska; Wanda Urbanska, author and television host of Simple Living with Wanda Urbanska who authored and co-authored nine books, published in the Los Angeles Times, Washington Post, Chicago Tribune and other papers, and who spearheaded the campaign to award the Presidential Medal of Freedom to Jan Karski in 2012.  She is currently president, Jan Karski Educational Foundation. The last recipient was The Polish Arts Club of Buffalo, founded in 1945 as a non-profit organization that organizes cultural programs to integrate, entertain and educate Polish Americans as well as the larger public about Poland’s culture and heritage. The Club devoted a considerable effort to the preservation and promotion of the murals by Józef Sławiński in the Buffalo-Niagara region.

In photo on right: Piotr Derengowski, University of Gdańsk, won one of two Graduate Research Paper Awards for his research on Capt. Alexander Raszewski’s Polish Legion and Other Less Known Polish Troops in the Union Army during the American Civil War.

Anna Jaroszyńska-Kirchmann, professor, Eastern Connecticut State University, received the Distinguished Service Award given to a member of PAHA who has rendered valuable and sustained service to the organization. She is PAHA’s former President, Vice-President and current Board Member and served as Associate Editor, Polish American Encyclopedia.