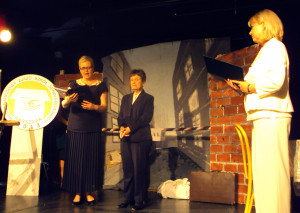 On June 11, 2013, I arrived at the Chopin airport in Warsaw, Poland, at the request of the Director of the Irena Sendler School #65, Malgorzata Ksiezopolska.  After I had already bought my ticket for the event, I received another invitation from a school teacher in Katowice, Mr. Marek Kaniewski, to come to his school. They were looking to hear from a survivor of the Ukrainian (UPA) massacre of 1943.

In photo on right: Bozenna (center) being presented with medal. Ms. Malgorzata Ksiezopolska on right.

I was picked up at the airport by Ms. Gabriela Bobrzak, of the Irena Sendler School, who drove me all the way to Katowice, about 4 hours. We talked in Polish, of course, and I found myself using Polish words that suddenly came back to me after all those years of speaking mostly English. Every time a new word came to mind, I told Ms. Gabriela “another new word” and that was our joke all the way to Katowice.

In Katowice, I told my story, in brief, as the students listened intently. There was soft applause and, of course, flowers. The program was most impressive. I met several key people from the Jewish Community and from the School District. After two days I was on a train to Warsaw. 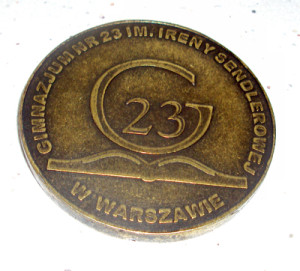 Back in Warsaw I was picked up at the train station by Ms. Gabriela and taken to my friend’s apartment in Warsaw. The next day I was invited to speak at another Irena Sendler school in Warsaw. More flowers and applause. The following day I was at the meeting of “Remembering Irena Sendler” with the daughter of Irena Sendler, Janina Zgrzembska; Anna Mieszkowska, author of a book about Irena Sendler;  Grazyna Majer, from the Jewish Community; Ilona Massalska, Foundation of Polish–Israeli Friends; Elzbieta Ficowska, rescued by Irena Sendler; Joanna Sobolewska, Chairman of the Children of the Holocaust; and Jolanta Baranska, long time friend of Irena Sendler. I was chosen to be the “Honorary Guest”, co-author of the Polish book “Przerwane dziecinstwo”. Everyone had an anecdote about knowing Irena Sendler. I told my story of the last time I met Sendler and a picture was snapped of her laughing at my joke which was… An atheist was walking in the forest when he heard someone walking behind him. He turned and saw a great big bear. Suddenly he called out “Oh, my God”.  God answers: “Now you call me?” The bear falls to his knees, folds his paws in prayer and says: ‘Bless me Oh Lord and these Thy gifts which I am about to receive . . . . . .’”

I met the Chief Rabbi of Poland Michael Schudrick, whom I have known for about 20 years, who congratulated me on the Medal I was to receive the next day.

The day arrived for the Medal Ceremony “Ludziom Czyniacym Dobro” (People Doing Good). In the audience was American Embassy Cultural Attaché Marek Wenig, someone from the Polish Sejm and several other dignitaries. When my name was called to come forward and my achievements were read with my biography, my knees rattled, but I walked slowly and gracefully up the steps unto the stage. I was handed the medal by Ms. Ksiezopolska with a “Dyplom”, then thanked the Committee for the great honor. Again, pictures and flowers.  Mr. Wenig asked me to have some pictures taken with him as we walked outside. 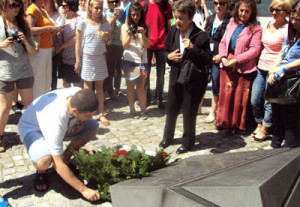 The following day it was time to visit the ZEGOTA monument and place flowers, which is my usual custom when visiting Warsaw. But this was to be different. Buses of students arrived with a large bouquet of red and white flowers for the monument. The students were very respectful, especially the boy who helped me place the flowers. He scowled at those who talked among themselves, not paying attention to the moment at hand. Then Poland’s famous historian/author Dr. Ewa Kurek gave a short speech on … “how the monument found its place here at the former ghetto site, and was funded by American Friends of Zegota with money raised by the lady you are meeting today Ms. Bozenna Urbanowicz Gilbride of the United States.” The monument was erected in September 1995. At that time there were many bushes growing at the site.  Today the bushes are cleared and stands the Museum of Polish Jews. As students gathered at the ZEGOTA monument, the flowers were placed by me and one of the students. The ZEGOTA monument now looks at the main entrance of the Museum and the Museum looks towards ZEGOTA.  How prophetic, I thought. That is as it should be. The text on the ZEGOTA monument/tablet reads in 3 languages: Polish, Hebrew and English:  ZEGOTA, Relief Council for Jews. The organization established by the Polish Underground State to rescue Jews of the Holocaust. It was the only such organization in German-Occupied Europe which was sponsored and funded by its government-in-exile.  Donated by American Friends of Zegota.

In photo above right: Placing flowers at the ZEGOTA Monument.

At the personal invitation of Archbishop Stanislaw Budzik of Lublin to “come and have coffee with me”, I was driven to Lublin by Dr. Ewa Kurek, author of the new book in English “Polish-Jewish Relations 1939-1945; Beyond the Limits of Solidarity”. My visit with the Archbishop turned out to be a lunch instead, cooked by a nun, who presented us with a wonderful “lemon soup”, among other offerings. To my surprise and delight, the Archbishop invited a friend/priest to come, Fr. Krzysztof Kaucha, who teaches at KUL, the Catholic University in Lublin. The Archbishop talked about wanting to learn English and how difficult it was to know where to place the right accent.  Our visit ended and we left him standing in the doorway waving us farewell.

My eighteen days in Poland were fruitful and I returned feeling as the Medal reads: “People Who Do Good”.