An Astute Practitioner of Serendipity

“We are proud of Malgorzata ‘Gosia’ Bondyra

Serendipity: “The occurrence and development of events by chance in a happy or beneficial way” … and this explains exactly what occurred when Malgorzata ‘Gosia’ Bondyra took advantage of an unfortunate situation and developed it into a very fortunate one. Malgorzata, President of PNA Lodge 238 and Vice-President of PNA Council 21, both in Baltimore, Maryland is a student at the University of Maryland Baltimore County (UMBC), Erickson School of Aging, pursuing a Bachelor of Arts Degree in Management of Aging Services.

Gosia attends classes both on campus and online as she works toward her graduation in May. Her curriculum includes serving an internship at the Seven Oaks Senior Center in Baltimore County. She developed the idea of conducting a hands-on Polish cooking class, with a resulting delicious luncheon, for about 20 of the seniors.

The scheduled unique event had to be cancelled when the pandemic novel coronavirus/COVID-19 burst onto the United States scene in late-March and the center was abruptly closed, as was almost every other non-essential public venue in Maryland, due to the governor’s declared State of Emergency. The governor then also later declared a strict civil lockdown. And that is when Gosia adroitly pivoted from receiving the very disappointing news to developing some very good news from it. 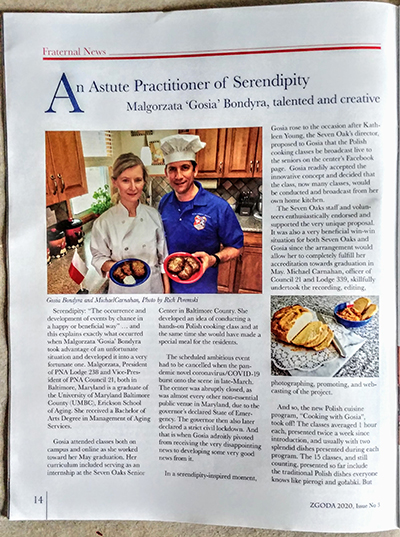 In a serendipity-inspired moment, Gosia rose to the occasion after Kathleen Young, the Seven Oak’s director, proposed to Gosia that the Polish cooking classes be broadcast live to the seniors on the center’s Facebook page.  Gosia readily accepted the innovative concept and decided that the classes (now classes) would be conducted and broadcast from her own home’s kitchen. The Seven Oaks staff and volunteers enthusiastically endorsed and supported the very unique proposal. It was also very beneficial win-win situation for both Seven Oaks and Gosia since the arrangement would allow her to completely fulfill her accreditation towards graduation in May. Michael Carnahan, officer of Council 21 and Lodge 339, skillfully undertook the recording, editing, photographing, promoting, and webcasting of the project.

And so, the Polish cuisine “Cooking with Gosia” classes began that averaged 1 hour each, presented twice a week since introduction, and usually with two dishes/items presented during each class. The 15 classes – and still counting – presented so far includes the traditional Polish dishes everyone knows like pierogi and gołabki. But she has also exhibited other delicious dishes like rosól/chicken soup, sałatka z kurczaka/chicken salad made from the soup’s chicken, zapiekanki/open-faced toasted sandwiches – a famous street food in Poland, and sałatka 10-cio warstwowa/a fabulous 10-layer salad consisting of 10 different individual food components.

The serendipity cascade continued via social media networking. The Seven Oaks Facebook page now has 697 viewers following the cooking classes, skyrocketing up from the originally planned class of just 20 seniors. Gosia’s culinary enthusiasts have logged-on from the United States, Poland, and even from down-under Australia. Director Young said that other Baltimore County senior centers have informed her that they are intrigued and inspired by the Seven Oaks extraordinary undertaking.

Gosia noted that she was thankful for the two PNA college scholarships she received because they helped to make it possible for her to attend the UMBC. Recently, UMBC has recognized her outstanding academic accomplishments and universal community involvements with a congratulatory email from the Dean of the Erickson School, and topped off with a long and comprehensive media interview by the university’s Communications Manager for the Humanities and Social Sciences that will be published and highlighted on the UMBC web site at graduation.

The virtual cooking classes will be part of the Baltimore PNA’s cultural outreach program. So please do rattle those pots and pans, and get ready to cook up a delicious Polish storm in your own kitchen. To view the “Cooking with Gosia” hands-on demonstration videos, and the accompanying written recipes, please visit the PNA Council 21 website: www.PNAcouncil21.com. 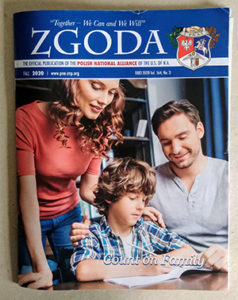