The talents of three outstanding Polish Americans have been honored by the American Council for Polish Culture (ACPC), the leading Polish cultural organization in the United States.  Presented  during the ACPC 65th annual National Convention in Baltimore, Maryland, the awards honor distinguished Polish Americans for their dedicated contributions to the promotion of Polish culture and heritage.

Presented with the organization’s 2013 Distinguished Service Award was U. S. Senator Barbara A. Mikulski who was honored at a special luncheon at Baltimore’s Holy Rosary Church on Friday, August 3, 2013.   The award was presented by Deborah Majka, out-going ACPC President and Honorary Consul for the Republic of Poland in Philadelphia.  The longest serving woman in the history of the United States Congress and the first woman to serve in both houses of Congress, Senator Mikulski has championed women’s health care issues, aggressively advocated for full employment and has been an energetic representative for the interests of Polonia and Polish causes.   The Honoree delivered a well-received address recalling her strong Polish roots in Baltimore’s Fells Point and Holy Rosary Parish and thanked the ACPC and the Polish Heritage Association of Maryland for the honor.  During her speech, Senator Mikulski also delivered an impassioned appeal for Polonia to rally in support of the Polish Visa Waiver legislation, which she is supporting.  “If Kosciuszko, Pulaski and Madam Curie were to apply for visas today to enter the United States, they would be denied.  This is a disgraceful treatment of one of our staunchest and strongest allies.” 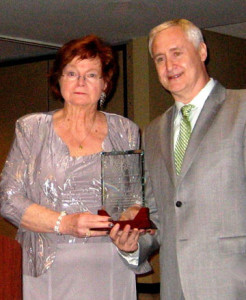 On Saturday, August 3, two honorees were acknowledged at the ACPC’s annual Awards Banquet at the Baltimore Sheraton Inner Harbor Hotel.  Chicago native Alicia Latkowski Dutka, community activist and volunteer, was presented with the ACPC 2013 Founders Award for her support of educational, community and cultural initiatives.  She was especially recognized for her commitment to Chicago Polonia, including her service in a number of elected positions with the Polish Women’s Civic Club and the Polish Museum of America, of which she is a Life Member.  Her contributions to the ACPC have included supporting scholarship efforts for young Americans of Polish descent and as Chairwoman of the Marcella Kochanska Sembrich Vocal Award Committee through which the ACPC promotes and nurtures young gifted vocal artists.  The Award was presented by President-Elect, Camille Kopielski. 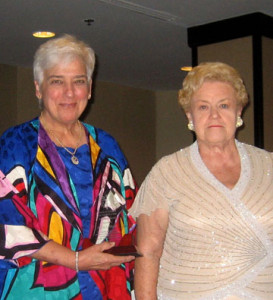 The ACPC 2013 Cultural Achievement Award was presented to Piotr Gajewski, Conductor of the Washington Philharmonic.  Born in Poland, Mr. Gajewski emigrated to the United States in 1969 where he continued his musical studies at the New England Conservatory Preparatory Division, Carleton College and at the University of Cincinnati College-Conservatory of Music, where he earned B. M. and M. M. degrees in orchestral conducting.  A recipient of the prestigious Leonard Bernstein Conducting Fellowship Maestro Gajewski has conducted many world premieres and is the winner of many prizes and awards, including the prestigious Leopold Stokowski Conducting Competition and, in 2006, the Montgomery County (MD) Comcast Excellence in the Arts and Humanities Achievement Award.   The Cultural Achievement Award was presented by Mary Ellen Tyszka, ACPC 1st Vice President elect. www.polishcultureacpc.org.