This year’s American Council for Polish Culture (ACPC) 66th Annual Convention  was held at the Hyatt Regency Hotel in downtown Buffalo, New York, July 29 – August 2, 2014. The   opening ceremony began with the Chopin Singing Society leading the assembly in the Polish and United States national anthems. Then the group was greeted by Buffalo Councilman David A. Franczyk. He was followed by the keynote speaker, Honorable Carl Bucki, Chief Judge U.S. Bankruptcy Court, with an inspiring speech about the history and influence of Polonia in Buffalo. A greeting from John Micgiel, the recently installed president of the Kosciuszko Foundation, who was unable to attend in person, was read into the record.

The sessions were led by Mary Ellen Tyszka who assumed the presidency from Camille Kopielski after her resignation due to health problems. Judi Tompkins took on the job of treasurer from Greg Biestek. Tom Payne moved up to First Vice-president, while Alicia Dutka‘s appointment to the Second Vice-president was confirmed. 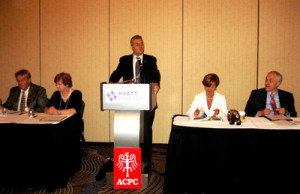 All of the ACPC committees reported on their accomplishments during the previous year. Co-Chairs Ceil and Ray Glembocki spoke about the ACPC display booth and the successful presentation by Rita Cosby at the National Conference for Social Studies (NCSS) in St. Louis. They outlined their plans for the Boston Conference in November. After the presentation many of the delegates and affiliates pledged financial support.

A new feature of the convention this year was an informative workshop where members heard how their organizations could benefit from the varied resources available within the ACPC. Members were provided with detailed information regarding the Affiliate Grant Program, archiving their records, borrowing ACPC’s posters for an exhibit, submitting articles regarding affiliate activities for the Polish Heritage newsletter, and the opportunities to benefit from the ACPC Literary competition and scholarship programs.

The new ACPC Education Committee Chair, Peter Obst, reported that it was not successful in dealing with the administrators of the National History Day Competition (NHD). For various reasons, we will not be able to present medals to two outstanding finalists for entries relating to Polish and Polish-American History at the University of Maryland 2015 finals. The ACPC, however, will send letters of congratulations and certificates to the 11 students who made it to the finals this year and whose entries incorporated events from Polish history. 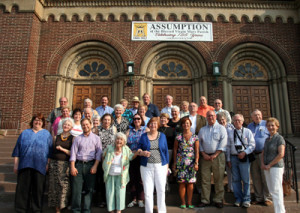 During Thursday’s lunch, historian Gregory Witul gave an interesting, humorous, and informative talk about the history and cultural influence of Polonia in Buffalo. He also led a bus tour of the historic Polish sites of Buffalo. The group stopped at St. Stanislaus Bishop & Martyr and Assumption BVM Churches, the Broadway Market, took photos on Superman Corner, had drinks at the Mickiewicz Library and contemplated the spiritually inspired architecture of Corpus Christi Church.

The recipient of this year’s Marcella Sembrich Award, Alexandra Nowakowski, delighted the delegates with a recital that included selections from Fryderyk Chopin as well as from composers Francis Poulenc, Vincenzo Bellini, Charles Gounod, and Jules Massenet. She was accompanied beautifully by pianist Jianan Yu. For the encore she sang the Jerzy Petersburski nostalgic tango To ostatnia niedziela with unexpected accompaniment by our own Dr. Wanda O’Brien-Trefil, The Sembrich Music Committee Chair.

In Photo: Group picture in front of Assumption BVM Church in Buffalo. (Photo by: Greg Witul)

In the convention’s resolutions several important events were incorporated. The first was the wreath laying ceremony in recognition of Lt. Col. Matt Urban held on August 23rd at Arlington National Cemetery. A signed copy of his autobiography, The Matt Urban Story: Our Most Decorated Combat Soldier was donated by Henrietta Nowakowski to the library of Cornell University, Lt. Col. Matt Urban’s alma mater. 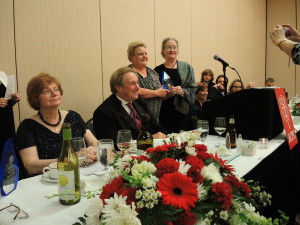 The convention concluded with the Awards Banquet. Recipients of the ACPC’s Founders Award were Mary Ann Mlynarski (Youngstown, OH) and Angelus Iwanczyk (Pittsburgh, PA); the ACPC Career Achievement Award went to Fr. Philip S. Majka, our longtime spiritual shepherd; the ACPC Cultural Achievement Award was presented to Polonia activist Szymon Tolak (Boston, MA), and the ACPC Distinguished Service Award given to Marcin Chumiecki of the Orchard Lake Schools’ Polish Mission. Their biographical notes are posted on the ACPC website: www.polishcultureacpc.org along with convention photographs and other information (see Convention 2014).

At conclusion of the proceedings the delegates were in agreement that it was a very productive convention and went home energized to continue the mission of promoting Polish heritage in their own local clubs and communities. 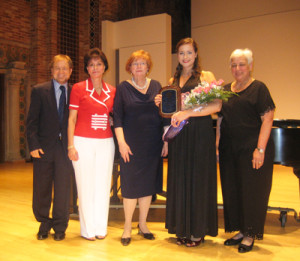