A Walk Down Memory Lane

Five generations ago my mother’s grandfather settled in Passaic, NJ. It was then that my ancestry began to establish roots in New Jersey that still stand strong today. These roots run deep. My mother was born and raised in Passaic, NJ. She has firmly held ties to her home state and has instilled in myself and my siblings a love for her home town. Before I could walk on my own, I spent summers, Christmases, and celebrated special family moments in the Garden State of New Jersey.

As my sister and I have been extremely fortunate to have the opportunity to write for The Post Eagle, I thought now was the time to share my direct connection to this newspaper’s hometown. What a small world it is……….. For example, having lived in Miami for the past 27 years, these are some of the connections to New Jersey that my mother has made sure to pass down to me and my two siblings.

I have visited my mother’s childhood homes in Passaic, Passaic Park and Clifton and have visited her former schools such as Number One school in Passaic and St. Claire’s in Clifton. It’s a long story, but a good one. It is celebrated as an intense, rich, story of Italian Americans creating a history that is strong and alive to this day. As a young child, my mom remembers visiting the firehouse and the police station as her uncle worked long hours. She dreamed of being a school teacher as she spent teacher workdays with her aunt at Number 11 School in Passaic. She spent afternoons, dancing for hours under the direction of Donna Farinella at Dance World Academy in Passaic, as well. Now, my sisters are dancers too. Hearing about morning walks down to the A & P on Van Houten Ave. with her beloved grandmother are commonplace, especially when the whole family gets together! 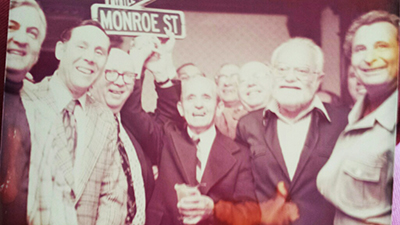 Countless stories have been heard around my family’s kitchen table about shopping trips to Ginsburg’s in downtown Passaic and trips down Myrtle Ave to pick up hot Italian bread straight out of the oven at Savasta’s Bakery. My Great-Grandpa, AKA D.D. Morgan, was a celebrated employee of the Walter Kidde Company and a staple of the Myrtle Ave. area of Passaic. It is with extreme love and pride that my mother speaks of him to this day. My Great-Grandpa Morgan, written about quite extensively in the book, A Special Time Stories of Passaic’s Second Ward Myrtle and Monroe 1926-1960 by Rosario D. Riotto, was known as a man of small stature, yet with the audacity and determination to accomplish anything. In fact, the book chronicles the story of how he stowed away on the Queen Mary’s voyage to England in 1936. He returned to the Southampton area as a hero with grit and perseverance. I can only hope to have received a portion of his passionate courage along the way!

As I am about to move on to college and begin a new journey of my own, I find comfort in discovering my family’s past and sharing in special memories with my mom and her family. Just this summer, I spent time in the Point Pleasant area and served as a groomsman in my second cousin’s wedding. It was a reunion of sorts, as we reminisced and made already existing connections that much stronger. The next generation of cousins and descendants of my great-grandparents created new memories to be continued.

It’s times like these that end up on someone else’s walk down memory lane.