Glen Cove, N.Y. The Polish National Home of Glen Cove has faced and overcome numerous obstacles since the time it was founded in 1922.  The most recent was last October’s Hurricane Sandy which washed out and forced the postponement of the Home’s scheduled observance of its 90th anniversary.

Despite the added burden of repeating most of the preparations made for the original event, the Home’s executive committee remained undaunted and resumed their planning process for its anniversary banquet.

The new date is Saturday evening, April 13th, on the premises of the Home itself, 10 Hendrick Avenue in Glen Cove. 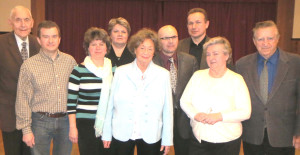 Polish immigrants who came to America in the late 19th and early 20th century established National Homes like Glen Cove’s in many of the ethnic communities they resided, according to Frank Milewski, president of the Downstate N.Y. Division of the Polish American Congress.

The Congress is a national organization headquartered in Chicago, IL, and acts as the umbrella organization of the nation’s Polish community.  Its local activities are conducted by divisions and chapters it maintains throughout the United States.

“The Glen Cove Polish National Home is one of the most active and successful ones still around,” said Milewski who noted how the demise of ethnic neighborhoods has forced the closing of so many of them.

“The local National Home and the nearby Polish church were historically the centers where Polish immigrants and their families would meet their neighbors and identify with them in a familiar social, cultural or religious setting,” he said.

“That’s why we congratulate Glen Cove’s dedicated and hard-working volunteers who are determined to make sure their Polish Home remains relevant and not becomes a relic,” he said.

Vice President Chet Szarejko was part of the delegation from the Downstate Congress which came to Glen Cove to congratulate the Polish Home’s executive committee for its determination and persistence in assuring their organization remains an essential part of the community.

Information about the Polish Home’s 90th anniversary observance can be obtained by calling Pres. Majewska at (516) 671-2032.