CLEVELAND— Europe’s first written constitution was signed in Poland on May 3, 1791. It embodied many of the same democratic principles contained in our U.S. Constitution. In fact, some of our constitution’s language can be traced back to Polish philosophers whose books were on the shelves in Jefferson’s library! This common devotion to the cause of liberty and freedom is why Polish Americans celebrate the anniversary every year. This year’s event marks the 71st year that the Polish American Congress – Ohio Division will host Constitution Day celebrations! The entire weekend of events take place in the area nicknamed “Polish Village” in Parma from May 3-5, 2019. See complete schedule below.

In honor of his years of service, the 2019 Parade Grand Marshall will be Dr. Mitchell Bienia (in photo). A retired teacher, counselor, department head and administrator in the Cleveland Public Schools and the former owner of the legendary Kniola Travel Bureau, Bienia fell in love with his heritage as a teenager and devoted himself to exploring Polish culture, language and perpetuating this passion in others ever since. Bienia has served Polonia on the national level as a National Director of both the Polish Roman Catholic Union of America and Polish America Congress. He is also a dedicated and devoted leader of NE Ohio’s Polish American community including the Cleveland Society of Poles, Polonia Foundation of Ohio, Polish Legion of American Veterans Post 30 and PolishYoungstown.

ABOUT THE POLISH AMERICAN CONGRESS The Polish American Congress was formed in Buffalo in 1944 as an umbrella organization for all Polish social, cultural, educational, veterans and fraternal organizations so that America’s Polish American community could be heard with one strong voice on important issues and events. Since the founding of the Ohio Division in 1948, the PAC has annually sponsored the state’s official celebration. For more information go to
www.polishamericancongress-ohio.com or call 216-478-0120

Information on the complete weekend of activities is available at
www.polishamericancongress-ohio.com/constitutionweekend.html

The basic schedule is as follows:

Saturday, May 4, 2019 – 7:00-11:00 pm
Polonia Ball & Banquet
incl Miss Polonia, Jr. Miss & Miss Babcia Contest  – $50.00  pp
Holy Spirit Byzantine Catholic Church, 5500 W 54th St., Cleveland, OH 44129.
Food and drinks with music for dancing and listening will be provided by John Szleszynski & Son. Highlight of the evening is the crowning of Miss Polonia, Junior Miss and Miss Babcia. These representatives of Polonia will serve as ambassadors of Polish Americans throughout the greater Cleveland area for the coming year. Reservations available by calling (216) 970-0507.

Sunday, May 5, 2019
10:00 am – Catholic Mass
St. Charles Borromeo Church, 5891 Ridge Road, Parma, Ohio 44129
The daylong celebration begins with a Catholic mass led by the Rev. Rob Ramser, Parochial Vicar at St. Ambrose Church in Brunswick. A colorful procession will start the mass with children wearing traditional Polish dress. In addition to the customary gifts of bread and wine presented at the offertory, a Polish touch will include a bouquet of flowers to be placed at Mary’s altar, a copy of the Polish-American Congress Constitution and By-Laws, a roster of members of the Polish American Congress, a specially baked bread together with a ramekin of salt to symbolize the staff of life as well as the hardships of life, an icon of Our Lady of Częstochowa – the patroness of Poland, and a White Eagle – the symbol of Poland. Children from Henryk Sienkiewicz Polish School will present the readings of the mass, as well as petitions of the faithful, in both the Polish as well as the English language. In addition, two traditional Polish hymns will be sung, “Serdeczna Matko,” and “Boże Coś Polskę.”

2:00 pm – Grand Parade
Step off at Parma Circle on Ridge Road heading north to Snow Road.
This exciting parade will consist of invited bands from Parma’s high schools, color guards from all of the Unites States service branches, Polish and Polish-American veterans groups, and representatives from the region’s Polish schools, fraternal organizations and many, many others, including diverse ethnic groups.

3:00 pm.  – After Party
Unity Federal Credit Union, 5839 Ridge Road, Parma 44129. Join your family and friends for a festive Polish-American polka party under the tent! In addition to toe-tapping polkas performed by North Coast Miz, there will be plenty of piwo (beer) and pierogi for your pleasure. It’s a great occasion for socializing with old friends, as well as the opportunity to make some new ones! 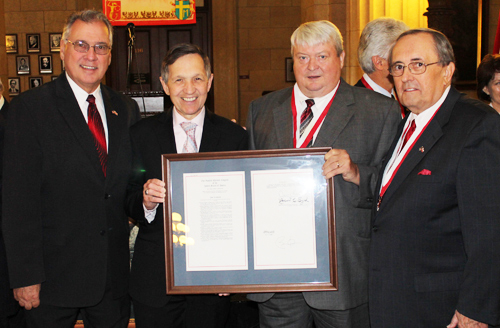 Second-oldest democratic constitution in the world

The Polish Constitution of 1791 is the second-oldest democratic constitution in the world. Even though it was never implemented, the Polish Constitution served as a rallying point for democracy and freedom throughout Poland over the centuries. Because the Poles demanded a democratic government, the neighboring monarchs, in fear of losing their authority, partitioned Poland, absorbed and confiscated its territory, three times, until Poland no longer existed on the map of Europe.

The desire for freedom burned in the hearts of Poles throughout 123 years of partition and occupation, followed by a short period of independence after World War I. Poland returned to subjugation in World War II, first under the boot of Nazi Germany, and then under the iron grip of Communist Russia. In 1989 Lech Walesa led a revolt in Po land, which precipitated the fall of Communism in Europe. Poland again regained its independence. Poland’s fight for freedom caused a domino effect throughout Europe, as Communist regimes fell, country after country, until Communism was finally wiped from the face of Europe.

Today people of Polish heritage throughout the world celebrate the Polish Constitution of May 3, 1791. It is a symbol of perseverance, pride, loyalty, patriotism and the struggle for freedom from oppressive regimes.